for Program Innovation with Elders

The Archstone Foundation and the Gerontological Health Section of the American Public Health Association presented its 2007 Award for Excellence in Program Innovation to Kairos’ The Dancing Heart at its meeting in Washington, D.C. on November 5, 2007.

The American Society on Aging in collaboration with MetLife Foundation just announced that they will award one of their 2008 MindAlert Awards to The Dancing Heart at their joint conference with the National Council on Aging, “Aging in America,” in Washington, D.C. in March 2008.

The Dancing Heart: Vital Elders Moving in Community Memory Loss Program is an innovative arts program that successfully engages patients with memory loss, their care givers and family members in art creation, participation and community building activity that leads to significant scientifically measurable health benefits. If the program is developed and replicated as planned, it could have significant impact on the quality of life of patients with memory loss and the costs of providing for their care across the nation.

Preliminary program findings have shown that 43% of participants have an increase in cognitive functioning and improvement in balance. The program is currently being evaluated further by Patricia Schaber, Ph.D., OTOR/L, at the University of Minnesota’s Department of Occupational Therapy. Results are expected in January 2008.

Kairos Dance Theatre, founded in 1999, is a unique intergenerational modern dance company based in Minneapolis. Its mission is to share the joy of dance and to nurture intergenerational connections by offering performances and opportunities for creative collaboration that celebrate people of all ages, abilities and experiences. The company consists of twenty performers from age eight to age ninety-eight, including both professional and avocational dancers, storytellers and musicians. Performances are influenced by modern and folk dance, and by movement improvisation, biography and oral history traditions from around the world.

Kairos’ The Dancing Heart: Vital Elders Moving in Community program was developed in 2001 to provide opportunities for artistic development, physical activity and community involvement for older adults. The program is designed to enhance their physical, emotional, cognitive and social well-being. In partnership with adult day programs, senior centers, assisted living facilities and nursing homes, Kairos tailors the program to the abilities of participants by taking into consideration their mobility and cognitive levels.

In March 2006, Kairos Dance Theatre adapted The Dancing Heart program for older adults experiencing memory loss. Funding for the adaptation and subsequent pilot program was funded by Johnson & Johnson and the Society for the Arts in Healthcare, and the Jay and Rose Phillips Foundation. The Dancing Heart: Vital Elders Moving in Community Memory Loss Program is a 90-minute chair-based program that offers structured dance and storytelling experiences. The program is offered once a week at the Amherst H. Wilder Foundation’s Adult Day Health Memory Loss Program in Saint Paul, Minnesota with support from the Bayport Foundation.

The focus of The Dancing Heart Memory Loss Program is to delay the progression of dementia and improve participant’s physical, emotional and social health. The program uses dance movements to increase participant’s flexibility and full range of motion. Participants are encouraged to use their artistic expression and create their own dances. As they dance to their favorite songs and music from around the world, program participants recall personal stories from the past. Together, the stories and dancing create a community of older adults recollecting and sharing their experiences through the engaging and health-enhancing medium of the arts.

Following each session, Kairos Dance Theatre and Wilder Adult Day Health staff conduct a 45-minute evaluation to document and observe changes in program participant’s memory skills. Balance and cognitive functioning assessments are also conducted at the beginning of the program and at 6-month intervals.

In order to further the dissemination and replication of The Dancing Heart Program, Kairos has developed a training curriculum entitled, Dancing Our Stories: Dance with Storytelling for Older Adults, which is supported by a three-year grant from the Helen Bader Foundation. The Dancing Our Stories training is a workshop for artists, caregivers and others who work with older adults. The first training was offered in June 2007 with a second planned for early summer 2008.

The Award for Excellence in Program Innovation was established by an endowment from the Archstone Foundation to the Gerontological Health Section of the American Public Health Association to recognize best practice models in gerontology and geriatrics. The American Public Health Association is the world’s largest and oldest organization of public health professionals, representing more than 50,000 members from over 50 public health occupations. Programs that innovatively link academic theory with applied practice in the field of public health and aging are considered annually for the award. It is the Foundation’s hope that these model programs will be replicated and continue to be evaluated in an effort to enhance services to the aging population throughout the United States.

The American Society on Aging has over 6000 members, who are researchers, practitioners, educators, business people and policymakers concerned with the physical, emotional, social, economic and spiritual aspects of aging.

Additional compelling recent research of Gene Cohen, Ph.D., about the effects of arts programming on the lives of elders is available at The Center on Aging, Health and Humanities- ­­www.gwumc.edu/cahh/rsch/nea_study.html. As lead researcher of “The Creativity and Aging Study” he has shown the positive health benefits of older adults engaged in weekly classes conducted by artist professionals.

In addition to the Dancing Heart Programs, Kairos Dance Theatre provides public performances, workshops and classes in various settings for a broad range of individuals, organizations and communities.

Artistic Director Maria Genné, M.Ed. is a dancer, choreographer and educator. She founded Kairos Dance Theatre because of her belief in the transformational power and the beauty of people of all ages, backgrounds and abilities dancing together in community.   She believes that dancing, as an art form, as a creative expression, as a physical expression of our deepest emotions and as a response to our relationship to the natural world, is rooted in the many cultures of our earth. Maria has focused her dancing, choreography and teaching on inviting children, adults and elders to find their own unique way of dancing as they listen to their body intelligence, tap into their creative power and find joy in the freedom of artistic expression.

Maria performs and teaches locally, regionally and nationally.  As a choreographer she has created more than 50 works that have been performed in Minneapolis/St. Paul, Philadelphia, San Francisco, Salt Lake City, Seattle and New York City.

Genné was Founder and Artistic Director from 1988-1997 of Young Dance, a young peoples’ modern dance company. During that time, the company performed at Dance and Child International in Salt Lake City, Utah, toured and presented their “Invitation to Dance” residencies in out-state schools for the Perpich Center for Arts Education, and gave many performances at local and regional venues. In the company, Maria sought to provide young people the opportunity to be full creative collaborators as dancers and choreographers.

She has assisted Dr. Jean Houston as dance associate in Houston’s year-long Mystery School and has led workshops and retreats locally and in New Mexico.

Additional information about the training and The Dancing Heart Memory Loss Program can be found at www.kairosdance.org. 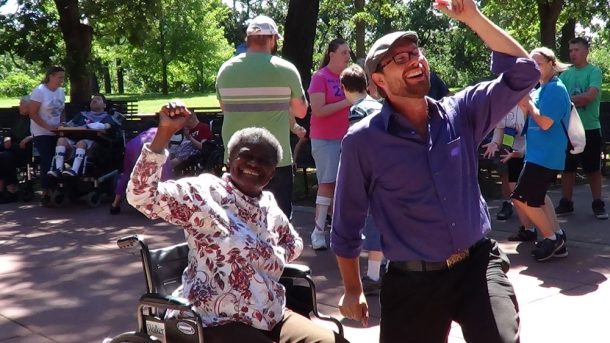